This sleek and muscled 25 year old from Austin, Texas is Melissa Merritt.
Melissa won the Figure Overall title in Las Vegas at the Fitness America World Championships on November 21, 2008.
Melissa just ran a Fitness Bootcamp with fellow fitness stars Abby Marie and Brenda Mikalajunas.
Abby Marie is also being trained by Melissa.
Posted by Jegger at 4:42 AM No comments:

Amanda Latona isn't just a fitness model.
She's a print model, M.C., spokes model, host, actress, bikini and fitness model competitor and a singer!
See?
None of these ladies just do one thing.
But this lady has a really diversified past.
Amanda was born on March 24th, 1979 in Pittsburgh, PA.
When she was 15 her family moved to Orlando, she got involved with Universal Studios there when she was 18, then she got involved in an all girls singing group called Innosense.
Innosense may not sound familiar to you, but let me tell you the bands line up.....
The original members were Danay Ferrer, Mandy Ashford, Nikki DeLoach, Amanda Latona, and ....Britney Spears.
Yes that Britney Spears.
Amanda also dated Backstreet Boy A.J. McLean for two years.
Jump forward a bit and Amanda had been working with a personal trainer.
She thought it would be fun to enter a fitness competition and set her mind to that.
You can see from the above picture, she more than succeeded.
As a matter of fact she became a two time Model America Champion, and she'll be in Muscle and Fitness this summer.
I think this lady can do whatever she puts her mind to.
Posted by Jegger at 6:15 AM No comments:

Jillian Michaels is the fitness expert that rose to fame on the NBC TV show The Biggest Loser.
She was the Red Team trainer until 2006, when she was replaced by Kim Lyons.
Jillian returned to the show in 2007 as the Black Team trainer.
She and Bob Harper are also the trainers on the Australian version of the show.

Jillian was overweight as a child, and her mother enrolled her in martial arts classes.
She took hold of that, got herself in shape and became determined to help others get in shape as well.
(She's been practicing Muay Thai and Akarui-Do for 17 years now)

Jillian's workout for her clients blends kickboxing, yoga, Pilates, plyometrics, and weight training together, giving them a total package.

Besides The Biggest Loser, Jillian hosts a Sunday talk radio show on Los Angeles' KFI (640 AM).

Posted by Jegger at 7:51 AM No comments:

Melissa Dettwiller was born on November 12, 1977 in Houma, Louisiana.
She is a female bodybuilder and fitness model.
Melissa actually began her bodybuilding training at the age of 15.
She combines the sleek form of a fitness model, and the size of a bodybuilder which makes her very popular online.

Posted by Jegger at 6:04 AM No comments:

Catherine Holland (Catherine Boshuizen) is a IFBB Pro Figure Competitor, a fitness model and personal trainer
She was born on March 21, 1980 in Portland, Oregon, but she now resides in Orlando, Florida.
Catherine stands 5’7”, weighs in at 130 lbs (contest weight) and 140-145 (off season).
She has a BS and MS degrees in Exercise and Sport Science from Oregon State University and she is a business owner and instructor of Celebration Boot Camps.

Posted by Jegger at 6:19 AM No comments:

Oxygen covergirl and rising fitness model Amber Elizabeth.
To stay in this condition, she does Pilates, kickboxing, weight training and CrossFit.
I would say it appears to be working for her.
Besides Oxygen, she has appeared in Muscle & Fitness, HERS and Mens Fitness among others.

Posted by Jegger at 6:08 AM No comments: 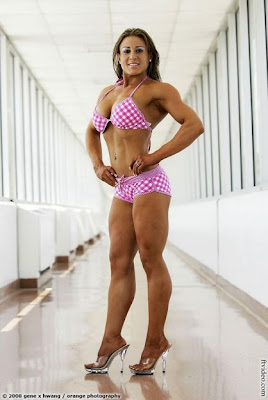 Dora Trikoupis is a National Figure Competitor, a Fitness Model and she does online training and nutrition.
She has competed in:

IFBB Figure Pro Erin Stern is from Wellington, Florida.
She's a fairly new face, but I'm sure you'll be seeing a lot more of her.
Before entering competition, she competed in track and field at the University of Florida. Her specialty was the high jump and hurdles.
When she's not competing, she works in the real estate industry.
Contest history :
2003 NPC, Gainesville
2008 NPC National Figure, won F class (over 5'7") and got her IFBB Pro Card.