Kristina (Tina) Rojas is an IFBB Fitness pro athlete and personal trainer from McAllen, TX.
One of the people that helped train Kristina is Fitness Olympia and Fitness International Champion Adela Garcia.
Working with Adela must have payed off because Kristina earned her pro card at the age of 20.

Fitness model and fitness competitor Yenny Polanco is an IFBB Athlete, born in Puerto Plata, Dominican Republic.
Like a lot of female athletes, Yenny doesn't just wear one hat.
She's an AFPA Certified Personal Fitness Trainer, Licensed Board Certified Cosmetologist, owned a hair salon from 2001 to 2006, Former Public Access T.V. producer (she produced a make-over show "Re-Inventing Yourself" where she did complete make-overs on volunteers) and she's a two time Light Flight weight Golden Gloves Boxing Champion!
Believe it or not, when Jenny got to the US from the Dominican Republic at the age of twelve, she couldn't even speak English.
And look at what she has accomplished!

I know I have mentioned "abs of steel" before, but check this out...

Here is a video of Aline Oliveira and Mara Blindada working out. 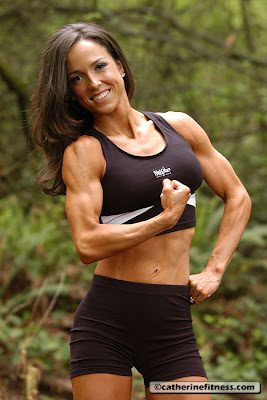 IFBB Pro figure competitor, fitness model and certified personal trainer, Catherine Holland was born on March 21, 1980 in Portland, Oregon.
This lovely young lady holds BS and MS degrees in Exercise and Sport Science from Oregon State University.
In addition to Figure Competitions, she is a business owner and instructor of Celebration Boot Camps.
She has competed in the:

You can see and learn more about Catherine at her website:
http://www.catherinefitness.com/ 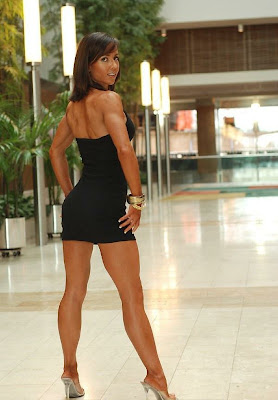 Posted by Jegger at 6:58 AM No comments: 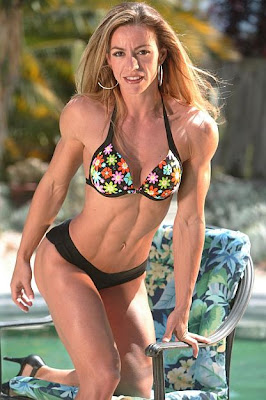 I did a write up on IFBB Figure Pro Juliana Malacarne last year on my other fitness women blog, but I wanted to do an update on her here.
Juliana is of Italian heritage, but was born in Brazil.
And like many of the other female fitness beauties that I do write up on here, she is multi-talented.
She's not only a fitness pro, but a female personal trainer, nutritionist and female fitness model. 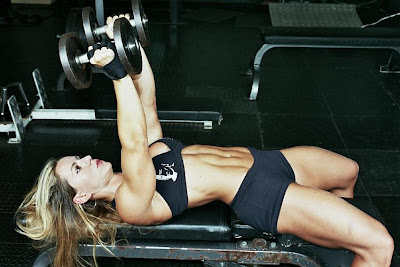 You can find out more about Juliana at her MySpace page here:
http://www.myspace.com/julianamalacarne

Posted by Jegger at 6:12 AM No comments:

Of course you associate the name Trish Stratus with the WWE.
She was the WWF/WWE Women's Wrestling Champion 7 times.
But before she was a professional wrestler or television personality, Trish was a sought after fitness model.
When Trish was growing up in Richmond Hill, Ontario, Canada, she wanted to become a doctor.
It looked like Trish was getting her wish when she became a pre-med student at York University in Toronto, Ontario.
Things looked good for her medical career until a faculty strike by YUFA in 1997 that lasted seven weeks, effectively shutting the college down.
Since Trish couldn't go to school, she got a job in World Gym, and was approached by Scott Able (who has trained over 300 bodybuilding and figure champions) to do a modeling job for a supplement line.
This lead to her catching the eye of Bob Kennedy, and being contracted to work for the Musclemag International fitness magazine from 1997 to 1999.
Trish became one of the world's most sought after fitness models, and wound up appearing on the cover of over 20 international fitness publications.
One of Trish's most remembered projects from her fitness period was the infamous The Dream Team calendar with fellow fitness model Stacey Lynn.
Posted by Jegger at 12:46 PM No comments:

Here is a blast from the past in a way.
Many of you may know Torrie Wilson as a female wrestler, but before Torrie ever set foot in a wrestling ring, she was a both a female fitness competitor and female fitness model.
Torrie was born on July 24, 1975 in Boise, Idaho.
Before becoming a fitness model, as she was growing up Torrie was into cheerleading, dance, and track and field.
But starting at the age of fourteen, Torrie began to suffer with anorexia nervosa and bulimia.
She started a fitness program, working out and eating six meals a day as a way to overcome this and plunged head-long into fitness.
Torrie entered her first fitness competition and placed third, then went on to win the Miss Galaxy competition in 1998.

At that competition she met Lisa Marie Varon, another fitness competitor.
Lisa went on to become Victoria in the WWF/WWE and Tara in TNA.
The meeting in 1998 was the start of a life-long friendship.
Also in 1998, Torrie took part in the Women's Tri-Fitness Championships, and placed first in the Grace and Physique round, also doing very well in the Fitness Routine and Obstacle Course.
Lisa Marie was also a top ten finalist in that competition.

As a fitness model, Torrie appeared in several of the muscle and fitness magazines swimsuit issues, as did another one of the fitness beauties who later turned female wrestler, Trish Stratus.
Posted by Jegger at 9:28 AM No comments:

This 5' 2", 115 pound beauty is fitness competitor and IFBB pro Jen Cook.
Jen has a huge modeling background including fitness, swimsuit, glamour and fashion modeling, commercial and print appearances, and being the spokesmodel for companies.
And besides being an IFBB Professional Athlete, she is a published international fitness and fashion model calendar model, and commercial actor.

And besides being a fitness competitor, she is also a judge.
Posted by Jegger at 8:02 AM No comments:

I did an entry on Diana awhile back on my other fitness blog here.
She's a fitness model, NPC national level figure competitor, certified personal trainer, fitness coach, fitness columnist, nutrition manager and founder/owner of Destined 2 Be Fit d2bfit.com
Posted by Jegger at 8:36 AM No comments: 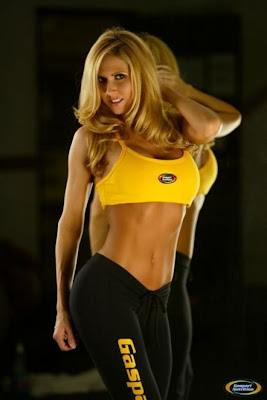 Dallas born Mariza Prince is all over the net.
She was Ms.Bikini Universe 2007 and the current spokes model for Gaspari Nutrition.
Plus she is a Cooper Certified Personal Trainer, a Physical Fitness Specialist, a Pre/Postnatal Fitness Instructor, trained in the Biomechanics of Resistance Training, a Fitness Specialist for Older Adults (65 and up), she has her Nutrition Certification and is she is CPR Certified.
Anything else?
Oh yeah, in May 2007, she won The Lyzabeth Lopex Fame Classic Bikini Competition.
Posted by Jegger at 12:39 PM No comments:

This is professional fitness competitor and fitness model Michelle Cagle.
Like a lot of other fitness women these days, Michelle became involved in fitness after the birth of her child.
She gained weight, didn't like it and decided to do something about it.
Michelle lost the weight she had gained, then went into fitness work outs and general nutrition to bring herself up to a higher level.
She works in being a mom with her workouts, taking stroller walks/jogs, swimming with her child, making sure they both eat right, doing yoga together etc.

Tiffany Forni is a self confessed “Fat Girl turned Fitness Nerd”.
This young woman is a testament to the fact that you can achieve your goals.
She started out with nutrition, and was lucky enough to find a nutritionist in a store that helped her.
After losing 30 pounds she decided that wasn't enough and went to Bodybuilding.com online.
Yes... online.
There she found people to help her get motivated, and on the bodyspace section she actually found a coach to help her.
You can read more about this and get all the details at her very own fitness site... http://www.tiffanyforni.com/
She has come full circle now.
She needed help and now she is helping others.
Her goal is to become a world class champion figure competitor, spokesperson and model, and I don't see anything that can stop her.

The last time I did an entry on the gorgeous Jodie Minear, she was a fitness model and NPC figure competitor.
Now she is a fitness model and IFBB Figure Pro.
I think Jodie is one of the most beautiful women competing today.
She's the perfect blend of size, symmetry, sultriness, sexiness and I think I just ran out of adjectives that start with a S.

And since the last entry on her, Jodie has been pretty busy in competition....

This lovely young lady is Lisa Giesbrecht.
Lisa resides in Armstrong, British Columbia and stands 5'8".
Besides competing, she is studying to become a personal trainer.