Who doesn't like Jamie Eason?
She's very popular on the internet, and she seems to be a very nice young lady, who actually goes into forums and posts.
To get into the incredible shape you see here, Jamie used a personal trainer and nutritionist.
It looks like it really paid off.
I can't really find much on her in the way of contest history....
Maybe someone out there can tell us where she has competed.

Besides being a fitness model, she is a computer software consultant.
Jamie has been on the cover of Oxygen Magazine twice.
Posted by Jegger at 9:42 AM No comments:

Fawnia Mondey (Fawnia Mondey-Dietrich) was born in September 24th,1975, in Kamloops, BC Canada.
She has appeared in Flex, Muscle & Fitness, Oxygen, MuscleMag International, American Curves, and Natural Bodybuilding & Fitness.
Fawnia is a dance instructor, fitness model, producer, actress and columnist.
Ever notice how these ladies diversify?

And this lady also wrestles.
No not for the WWE, she REALLY wrestles as in she got 4th place at the FreeStyle Wrestling B.C. Provincials in 1993.

And if she still looks familiar and you don't know why, she's appeared in "The Outer Limits", "The X Files" and "Millennium".
Posted by Jegger at 9:38 AM No comments:

Awhile back I did a write up on the lovely K.L. Frahn.
Well here is her sister, the equally beautiful Allison Frahn.
Allison was born on September 27, 1980 in Nanuet, NY.
She definitely has a ripped lean look, and if you go to her website and check out her bio, you'll see that this young woman overcame a tremendous obstacle to get to where she is today.
It's a very inspiring story.
Besides doing figure competitions and being a fitness model, she has a BA in Communication from the University of Delaware. 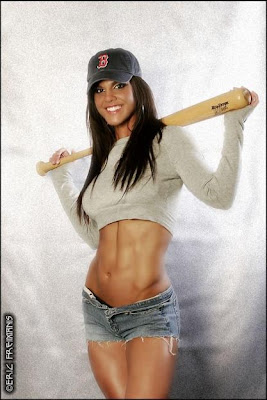 Laura Coleman is an up and coming fitness model and competitor.
She's 5'7" and weighs 127.
I was only able to find two competitions Laura has been in, she placed 4th at the 2005 Los Angeles Bodybuilding, Fitness & Figure Championships, Class F and she came in 1st in Figure F at the 2007 Los Angeles Bodybuilding, Fitness & Figure Championships.
Laura has appeared in Oxygen, Ironman, Muscle Mag and Muscular Development.
And as far as I can tell, she is in a relationship with retired IFBB Pro Bodybuilder Eryk Bui.
Posted by Jegger at 8:29 AM No comments:

This stunning young lady is NPC figure competitor Jodie Minear.
Not only has Jodie got a great physique, but those piercing green eyes could stop anyone in their tracks.
Jodie appeared in the 2009 FLEX Swimsuit Issue.

Posted by Jegger at 8:28 AM No comments:

This sleek and muscled 25 year old from Austin, Texas is Melissa Merritt.
Melissa won the Figure Overall title in Las Vegas at the Fitness America World Championships on November 21, 2008.
Melissa just ran a Fitness Bootcamp with fellow fitness stars Abby Marie and Brenda Mikalajunas.
Abby Marie is also being trained by Melissa.
Posted by Jegger at 4:42 AM No comments: